This may not seem like a particularly interesting thing to blog about – I know. But those of you amongst us who have experience with small children will know why this sent me and my husband to the floor, on our knees, praising to the God of Samsung…

The other day I made an amazing discovery. I was in the utility room, (utility room of dreams I might add, most of the best thoughts occur there whilst I’m folding pants and/or hiding from my children) I was tidying through the rubbish (read throwing huge bags of cardboard 20 ft out of the back door and hoping to miss the small people ‘helping’) there, nestled amongst the cardboard sleeves for the ready meals I try to forget I’ve eaten, was this… 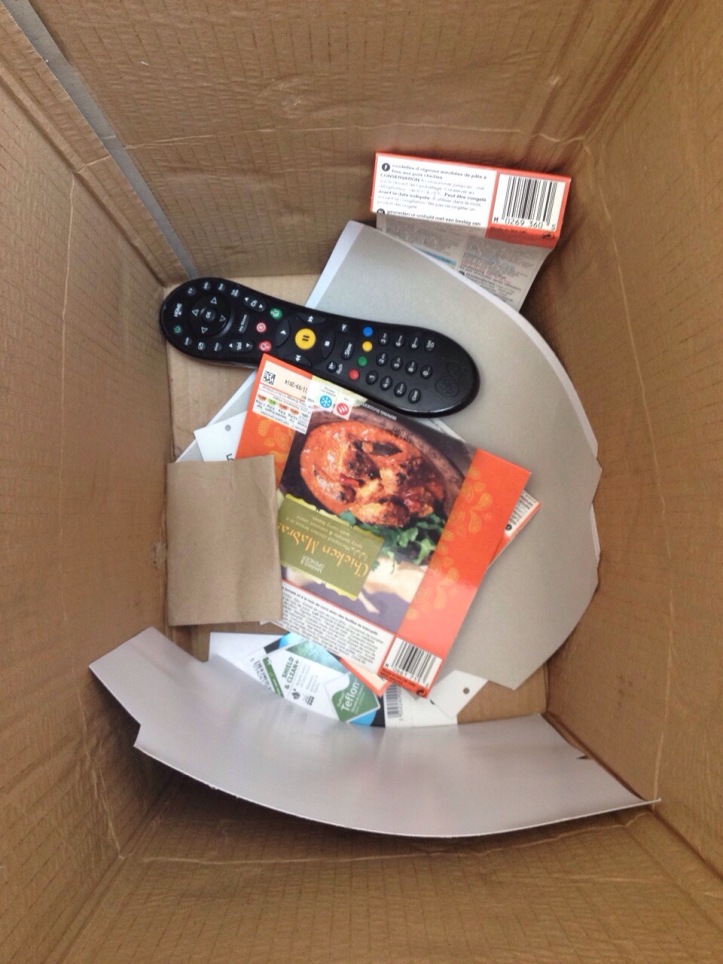 Can you believe it? Of course you can’t – you’ve probably already stopped reading, or you have no concept of what this means, or the hell that had to be endured for eleven, ELEVEN days without it.

It’s a daily occurrence in this house. Since baby learned to walk, her main objective has been to destroy. And control (she’s been hell bent on creating a military coup like this one since she was born – she had the upper hand for eleven days, a good run, much ground held). She’s not massively choosy about what she hides, although there is often a humorous undertone to her spoils: the Finding Nemo DVD (still MIA) Woody from Toy Story (my son is still convinced Woody learned to walk) the new Cloudbaby her sister had only just received for toilet training related successes… And these are just the ones I’m aware of. There could be hoards of things hidden I don’t even know about!

So what? I hear you cry, your remote was lost, get up, change the channel (lazy so and so’s).

The first night – we just didn’t watch TV. It was fine, a novelty. Second night, less of a novelty, but still! Third night – getting tetchy, slightly panicked about the prospect of a weekend without telly wasn’t great. The fourth night was Saturday, a friend was watching X Factor with us, I was folding through the biggest basket of washing in a vain attempt to find it. No alternative – TV on, let’s do this.

A few months ago I’d had a rush of guilt about my children’s safety and innocence when watching the TV. Truth time: I left them watching Peppa Pig and returned 5 minutes later to find the two oldest clinging to each other, white with terror having turned over the channel to Britain’s Most Haunted (‘Mummy, that man talks to the dead‘) in my defence, it was the middle of the day and I had just gone to get a brew. The result of this was a) a few sleepless nights when they had nightmares b) I locked every single channel except the children’s channels.

Back to Saturday night, at the TV box…

‘Ok, there’s channel up/down buttons so it should be ok… Hang on… There we are.’ Smug faces as the wizardry TV box thingy finds the correct channel.
‘Oh. Ok. Passcode…’ We have visitors, throwing a strop and huffing out of the room is not an option.
‘We can’t watch it then! We might have to watch it upstairs?’ Thoughts of me, my husband and friend watching X Factor, crammed on our bed – no, not happening. Suddenly, a lightbulb goes off in my head (I know, I wasn’t even in the utility room)
‘We can use use the iPad!’ Immediately I’m the hero, the living room is soon filled with whoops and frivolity and the spoils of bad singing and pantomime drama. All is well. So the next week and a bit were spent
1. marvelling at the sheer genius of the fact that you can use your computer as a remote control.
2. Realising you bought an expensive tablet and now its sole purpose is to control your TV.
3. Likening your ‘at home’ time, away from work to some bizarre Dom Joly sketch from the 90s where he hid in public spaces and then jumped out and loudly faked a call using a giant mobile phone.

I quietly enjoyed the moment of discovery in the recycling by myself, I immediately forgot the tears and tantrums of the previous eleven days without it and pondered quietly, seriously…where is the Finding Nemo DVD?

I'm British. It's embarrassing for me to ask people to share my work. So with my fist in my mouth and the other over my eyes... It'd be just lovely if you share my work. *dies*

Join 2,095 other subscribers
Follow What Mum should have told me… on WordPress.com

Delighted to be a Mamalode writer